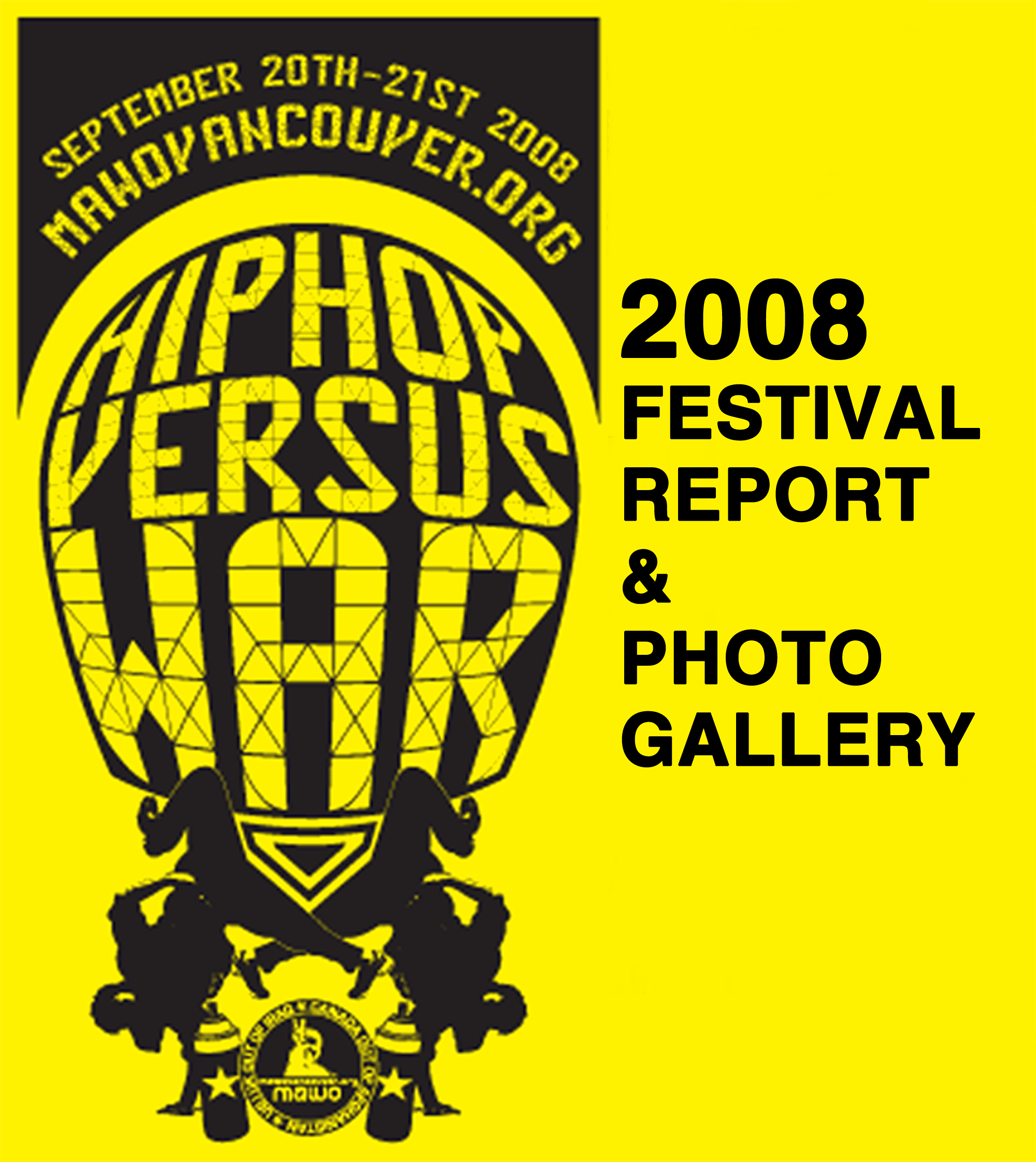 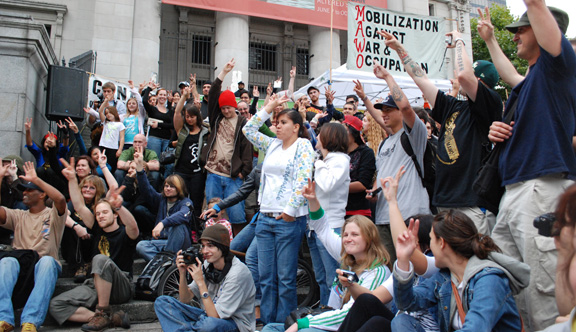 Vancouver’s 4th Annual-Hip Hop Festival Against War and Occupation, “HIP HOP VS. WAR”, has come to a successful closing for this year. Organized by Mobilization Against War and Occupation (MAWO), over 1700 people attended two packed days of workshops, tutorials, and a moving line-up of local and international artists. From Surrey to Vancouver, people of all ages, with participants from the age of 7 to 77 years, and backgrounds came together to learn, to dance, and to shout, “I Love Hip-Hop!” and “No to War!” in the same breath.

Saturday’s events in Surrey kicked off with the workshop, The Rhymes and the Reasons: Hip Hop as a Voice of Oppressed People (click the link to view the photos). Organizers had to bring out more chairs as highschool students, families, and the young at heart packed the hall to hear Scruffmouth, aka Kevan Cameron, Os12 aka Ron Dean Harris, Ill Eagle aka Shannon Rose, and MAWO organizer Shakeel Lochan. From the roots of hip-hop in the stressed streets of New York, to its current use by women and Indigenous peoples in Canada to voice their opposition to injustice and to give life to their ideas for a better world, hip-hop artists themselves outlined the meanings behind their life’s work. To close, Shakeel emphasized how this spirit has spread across all 7 continents, from young Cubans rhyming and defining their role in that country’s revolution, to Palestinians opposing a 60 year occupation by Israel .

The chairs were then cleared and the stage set for Joose Justice and Estea El to run the MC segment of Back to the Lab: MC & Breakdance Tutorials (click the link to view the photos). As CBC TV filmed a minute and a half segment featured on the 10 o’clock news, the room formed a large circle as everyone clapped, shared the mic, and then crowded in to join b-boys Savage Roc and B-Minus light up the dance floor and share their skills with the many who wanted to learn.

The lights dimmed, and artists such as Ill Eagle, Discreet da Chosen 1, Breakpress , Brittany B, Speeches Beyond, and Jflowz and Daniel shared the stage and their songs with the crowd as part of the Drop Beats Not Bombs: Evening Show (click the link to view the photos). The evening was brought to a crescendo as two of hip-hop’s finest, Manik 1derful and Hellnback rocked the mic with songs from their music videos, freestyles about their experiences as young indigenous men living under occupation, and inspired rhymes which closed off day one of “HIP HOP VS. WAR”.

For day two, over 1,500 people crowded the Vancouver Art Gallery over the course of the day to check out the exciting unity between the anti-war movement and hip hop. The crowd at the By Any Means Necessary: All Day Outdoor Show (click the link to view the photos) made it the largest show in the festival’s history!

Kelly White, a Coast Salish elder welcomed the festival to her traditional territory. After Kelly, a storm of artists took the stage and downtown Vancouver was shaking to the sounds of Discreet da Chosen 1, Twyla Dawn, Os12, and Project. Manik 1derful and Hellnback made another showing, giving big props to MAWO and continuing right were they left off the night before. Influents, Vancouver’s anti-war hip hop staples, Genetics, and Punjabi-fusion hip hop sensations A-Slam tied up the first half of the day.

500 people then crowded around the breakdancing floor, as an open session of b-boys and b-girls was led by the Now or Never and Rhythm and Actions crews. The crowd cheered as loud as the music, and ended off with everyone throwing their peace signs in the air.

Kasp of 7th Generation and Baby Paul brought us back to the lyrical battle against occupation at home on indigenous land, and were later joined by 3 time Juno award winner Moka Only.

Throughout the day people were also drawn to the Malcolm X tent to see film, pictures and writings by the famous fighter for justice, dignity and peace.

The rain could not stop the show, as Speeches Beyond returned from the first night, and was followed by Joose Justice who got the crowd shouting with a song dedicated to MAWO organizers. Making a surprise appearance, Heatwave wrapped up the event by reminding everyone, “It’s bigger than hip-hop!”

The words of Malcolm X, “By any means necessary” formed the backbone of the festival. Hip hop was the DJ and the over 1,700 people that came out and created a diverse culture of protest and resistance were the MCs.

Check out the artist bios and program for more information about the festival, and plan to come out next year to participate in the one of a kind Vancouver Hip Hop Festival Against War & Occupation.

Photos from the Festival
(Click to view larger image)

Saturday September 20 - Workshop:
'The Rhymes and the Reasons: Hip Hop as a Voice of Oppressed People'
Featured artists on the panel Os12, Ill-Eagle, Scruffmouth

Saturday September 20 - Workshop:
'Back to the Lab: MC and Breakdance Tutorials'
Feat. Estea El from the Influents Crew & Joose Justice
B-Boys B-Minus & Savage Rock from the 'Now or Never' Crew

(from left to right) Ill-Eagle; Dj K-rec; Discreet da Chosen 1; Baby Paul on the turntables; the crowd enjoying the show; Breakpress; Speeches Beyond

CBC News interviews MAWO organizers (left), and festival artists (center)
& everyone gets in on signing antiwar petitions and getting more info on getting involved! 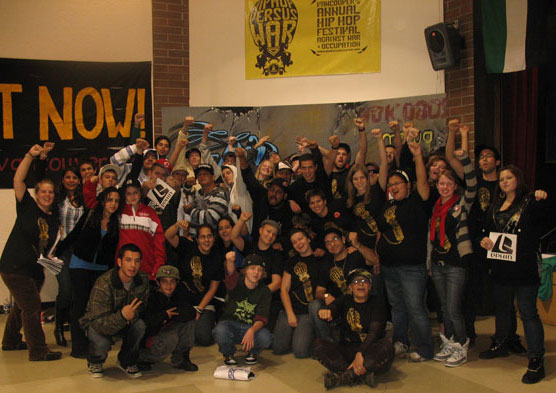 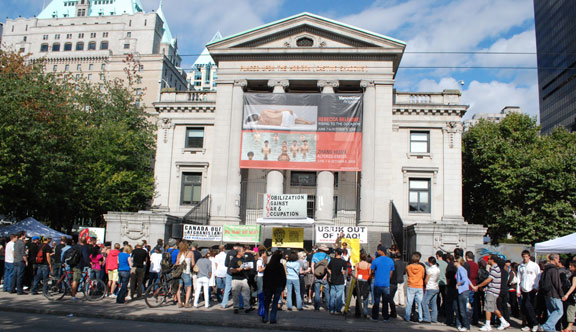 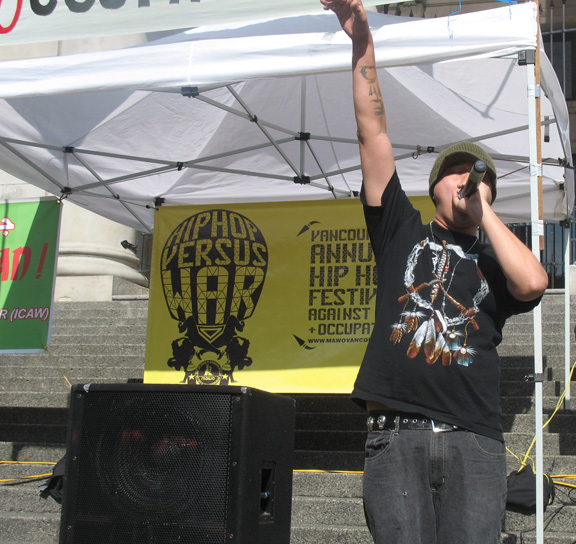 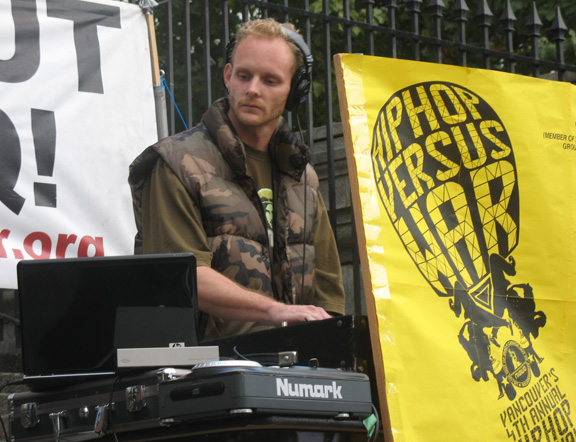 (From left to right) Os12; Manik 1derful & Hellnback; MAWO info tables got a lot of visitors throughout the day; DJ C-Lo 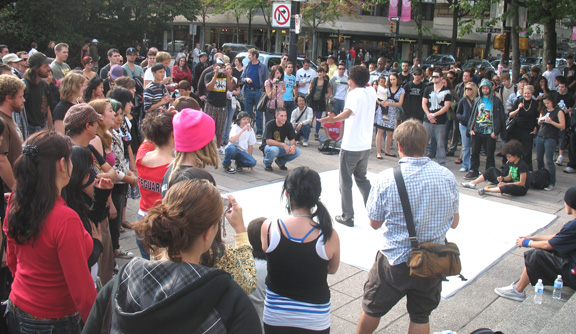 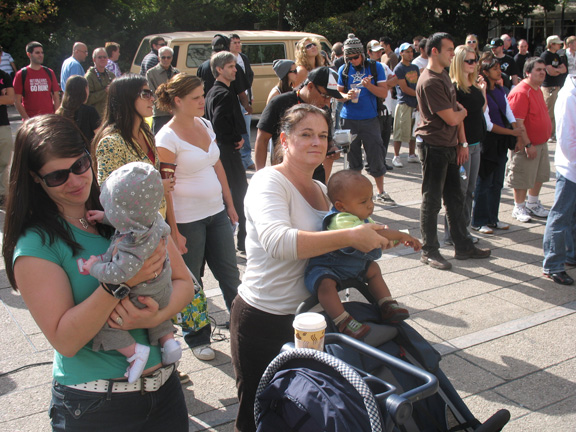 (From left to right) MAWO organizers were busy the whole day; Grafiti wall "Hip Hop VS War" by Ephin; Coast Salish Elder Kelly White; Project gets right into the crowd; a day for the whole family!

(From left to right)Breakdancers from the Now or Never Crew & the Rhythm & Arts Action Crew took to the floor for a battle with over 500 spectators! 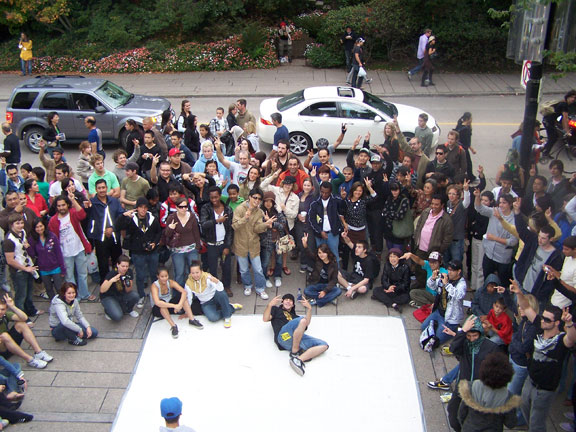 Everybody throw your peace signs up! 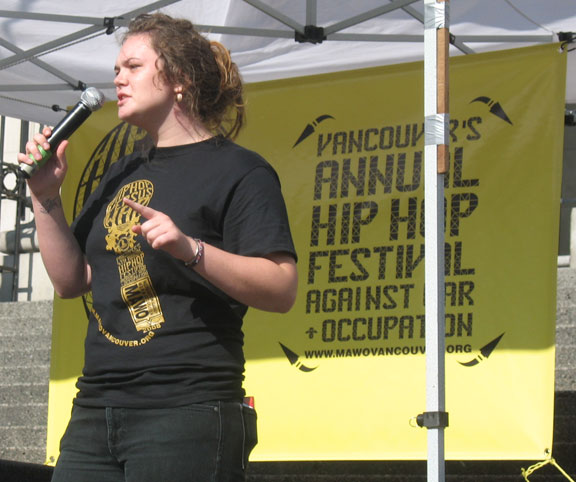 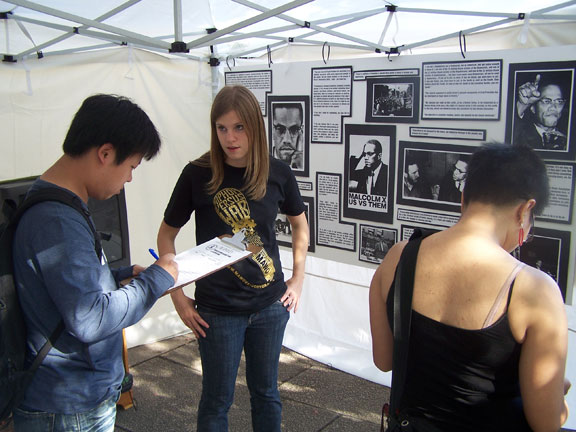 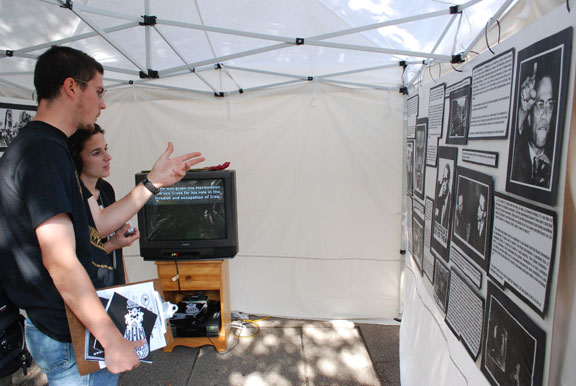 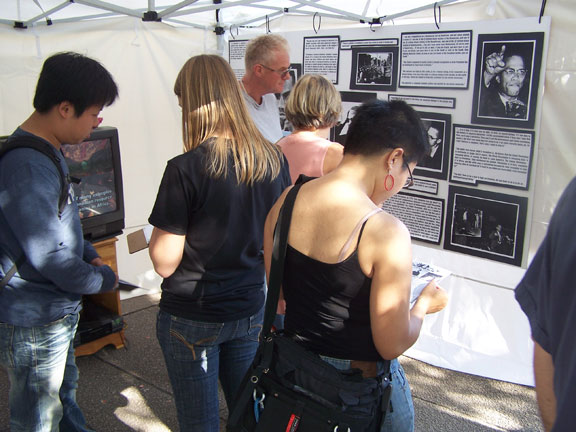 (From left to right)MAWO organizer Sarah Alwell; the Malcolm X tent was a popular part of the festival set-up; the older generation of hip hop lovers (and MAWO antiwar organizers!) 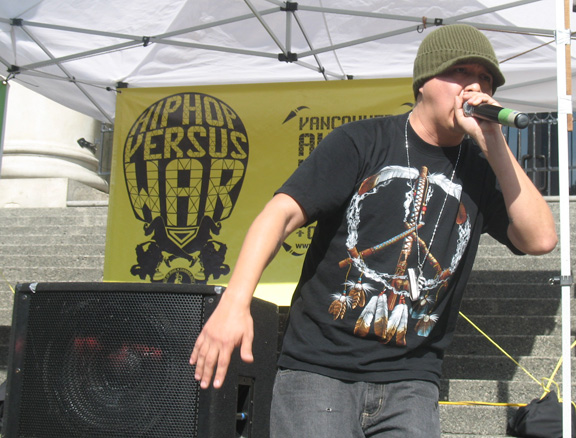 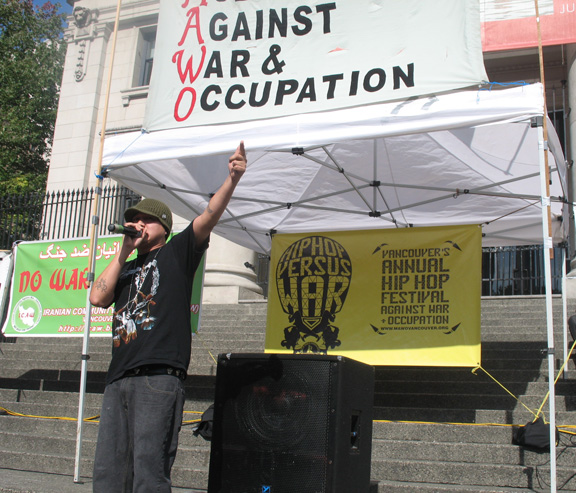 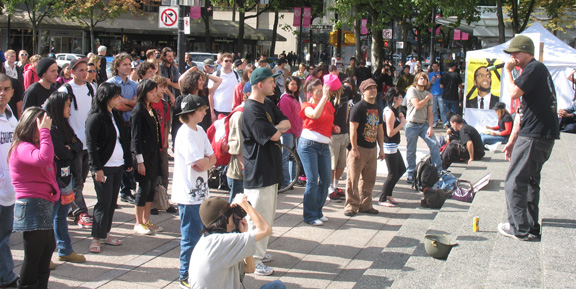 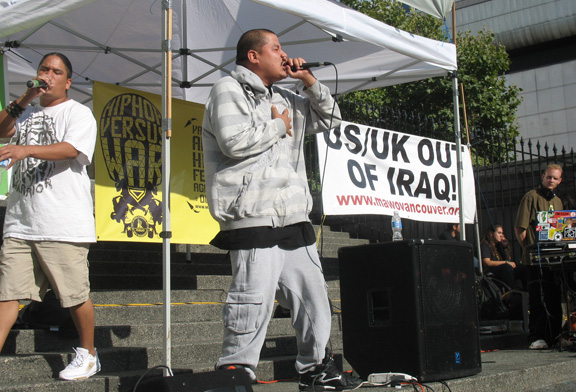 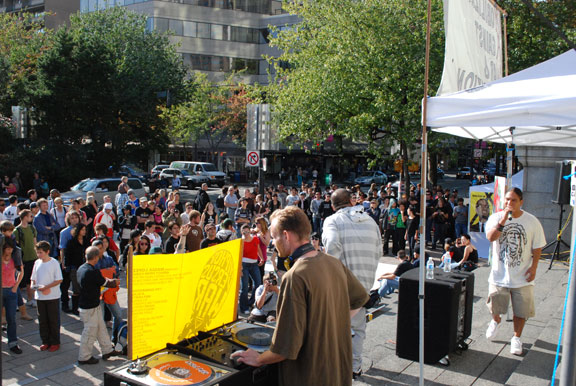 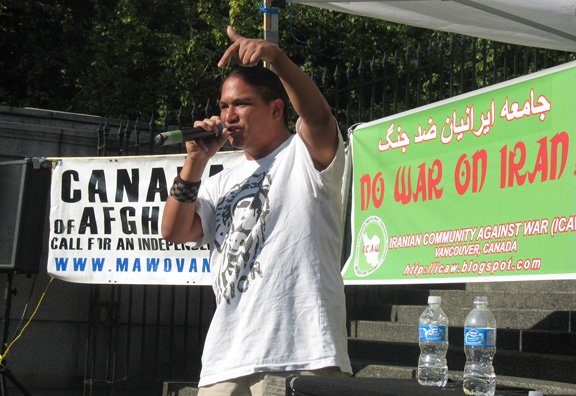 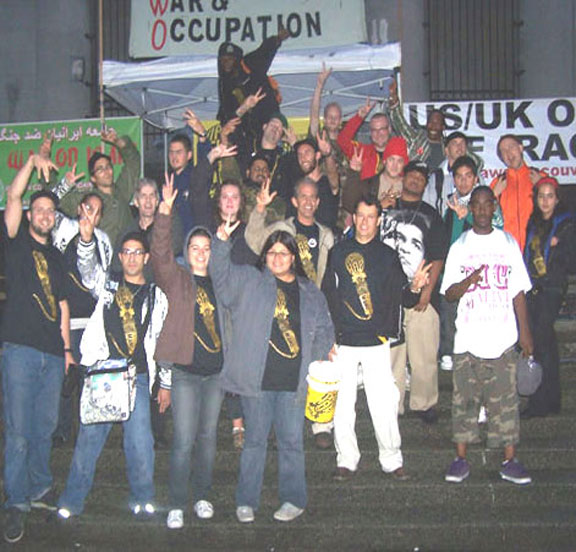 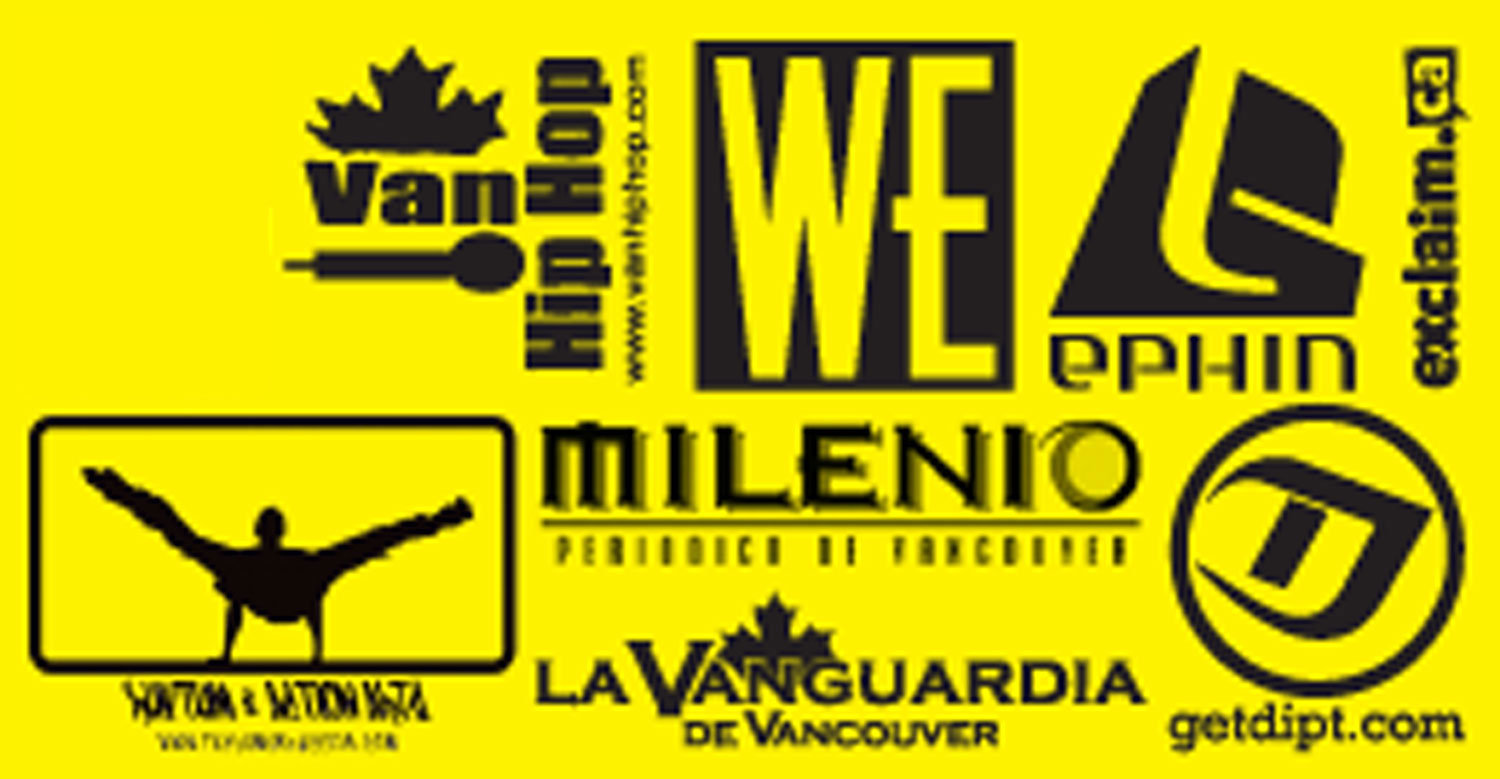