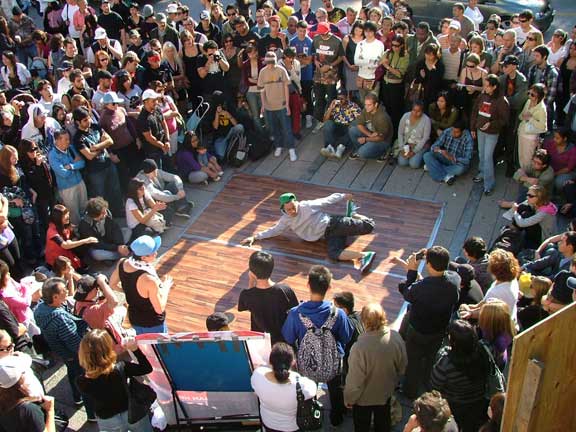 HIP-HOP VS. WAR!
Over 2000 People Pack Biggest Festival Yet
Click Here to go to Photo Gallery

An explosion of “HIP HOP VS. WAR” hit Vancouver this September as the city marked its 5th annual Hip Hop Festival Against War. The two day festival was organized by Mobilization Against War & Occupation (MAWO) and attracted over 2000 people. The special feature for this year’s festival was headliner Obsesion, all the way from Cuba! Youth, students, workers, elders, immigrants, Indigenous people, women, and peace loving people in general took part in the workshops, the hip hop tutorials, break dancing, and of course… the music!

The festival opened up in Surrey on Saturday, September 26 to a packed Ukrainian Hall. Coast Salish Indigenous rights activist Kat Norris opened the festival with a greeting and a welcoming to the land. Janine Solanki, the co-chair of MAWO, got the show started by introducing the opening forum “Rebel Without a Pause”. The panel filled the front table as people heard from hip hop artists and poets JB the 1st Lady, Scruffmouth, Shakeel Lochan, and Obsesion. The artists and activists spoke from the heart, reaching back to the roots of hip hop and how it still must be used as a voice and a tool against injustice today. Obsesion explained how hip hop is used in Cuba to speak out against US government aggression against Cuba.

MAWO hip hop favourite Joose Justice along with Sunnite MarX kicked off the next workshop called “Bring the Noise”. Joose and Sunnite headed a MC’ing interactive by showing the hip hop lovers how to free style and think of jams off the top of the head. Some of the crowd got into it to share their own words too.

With the buzz going and people off their feet already, Janine introduced the Now or Never Crew to lead a break dancing workshop called “Put it Up”. Now or Never, who have played internationally and won national competitions, showed their moves and why they are the number one break dancing crew in town.

And now for the music! The evening show, called “Louder than a Bomb”, heard some sweet rhymes. Payvand Pejvack, an organizer with MAWO, MC’d the rest of the night and brought up Conspirituality to kick things off. They were followed by newcomers RaFocus. Lil Precious, whose songs can be heard on the Beat 94.5, blew the crowd away with her rhymes and rhythm. Beyond Color followed and Surrey favourite Brittany came to the mic next.

Then with the crowd surrounding the stage, the lights went down, and the intensity almost blew the roof off as Obsesion appeared and took the night away. Wearing traditional African clothing Magia, Alexey, and Isnay played a full set of their revolutionary Cuban hip hop. And when they were wrapping up, the crowd chanted ‘encore’ until they came out for more.

The next day the show got started right where Day 1 finished: more hip hop! Over 2000 people flooded the Vancouver Art Gallery on Day 2 as hip hop lovers, peace lovers, and just about everybody walking by stopped to check out the festival.

Payvand MC’d Day 2 and got it started with a MAWO hip hop classic. Fully Faded got the sunny day started with progressive lyrics for justice. The Art Gallery quickly filled up as Coast Salish elder Kelly White gave an opening to day two and welcomed people to the land. Showing her energy Kelly got the crowd into it calling for “MAWO FOR PEACE”!

Before the show went any further Payvand announced and made sure everyone checked out the tents at the side. The Malcolm X tent was full of images, quotes, and information about the man who struggled so hard for human rights. There was also a section on Cuba solidarity, which gave people information about the pain and suffering the Cuban people endure from the US blockade on the Cuban people.

Now with the show going A-Slam rocked the crowd with their Punjabi-fused hip hop. Discreet da Chosen One and Speeches Beyond each came up next. They were followed by N’didi Cascade and Deanna Teeple. DJ K-Rec began to spin the tunes as Estea El shared his lyrics. K-Rec kept the beats going as the Now or Never Crew, making their second appearance of the festival lay down the mat and showed Vancouver how to break dance! The crowd surrounded the break dancers and flashed their peace signs to the air as the place was bumping.

This set the stage for headliner Obsesion! The Art Gallery literally filled up to get a taste of Obsesion. They got the crowd into it with chants of “Viva Cuba!” and “Peace Now!” When they wrapped up Payvand announced Obsesion CD’s for sale which sold out in less than five minutes. In fact there were not enough! The people loved Obsesion and wanted more!

But the show did not end there. Manik 1derful showed why he is needed at MAWO Hip Hop Festivals. He stood on the speakers and spoke closely to the crowd as the people were lovin’ it. JB the 1st Lady followed Manik and brought the house down. Joose Justice shared his newest as well as some classic Joose faves as he gave props to the MAWO organizers. Heatwave followed, and then came the Groundbreakers. The sun was going down but the people stayed as the final act of the festival came up: Scruffmouth, aka Kevan Cameron, the champion of the 2008 Vancouver Poetry Slam. Scruffmouth spoke from the heart, and also brought up a crew to help him keep the crowd going as the festival came to a close.

Well over 2000 people came to fill the streets of this year’s festival. This international annual Hip Hop Festival Against War fused people’s love for hip hop with the message of peace. The artists and the organizers reminded people that it’s more than just music: it’s for justice, it’s for peace. The Festival is a sure thing, and when the sixth annual Hip Hop Festival Against War hits Vancouver in 2010 you had better make sure you are there to see what people are talking about.

Photos from the Festival
(Click to view larger image)

The panelists spoke to a packed hall; At the panel were (left to right) MAWO Co-Chair Janine Solanki, JB the first Lady, Scruffmouth, MAWO Festival Organizer Shakeel Lochan, and from Obsesión Alexay, Isnay, and Magia!

The tables full of antiwar materials were busy all night long

DJ'ing Interactive Workshop 'Put it Up'

(from left to right) Beyond Color, Conspirituality, RaFocus, Lil' Precious and Brittany 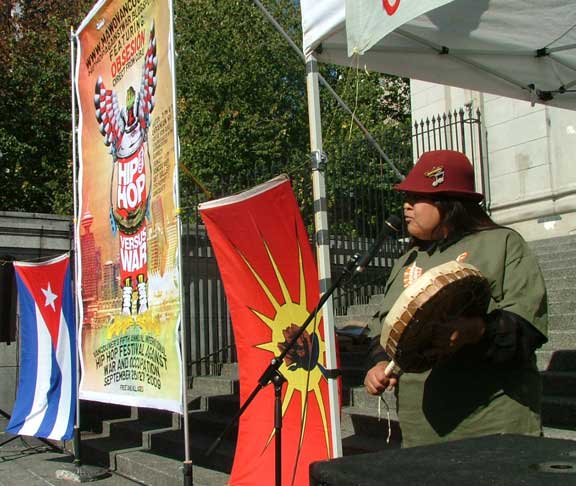 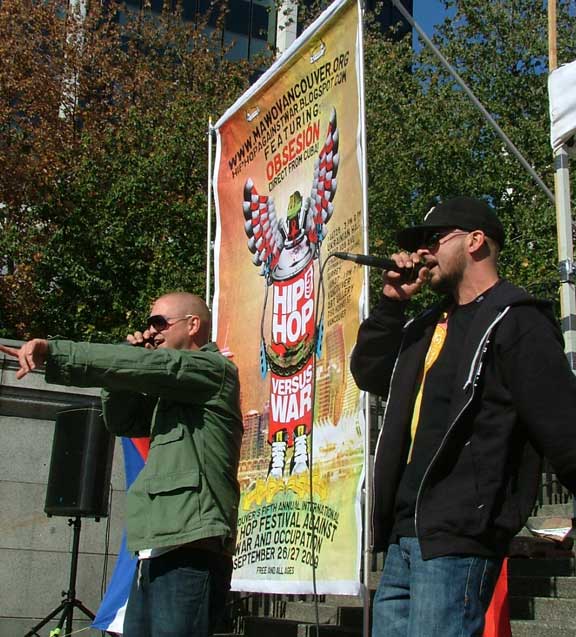 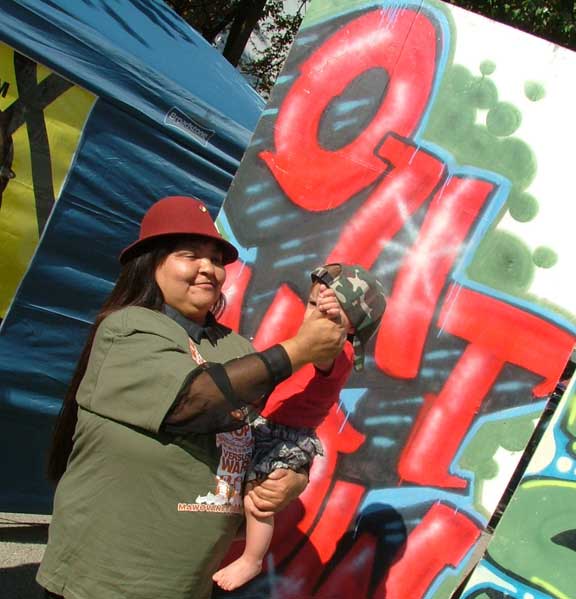 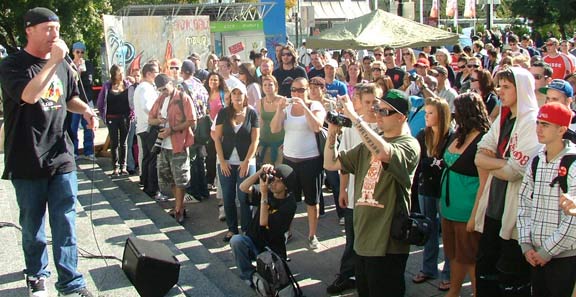 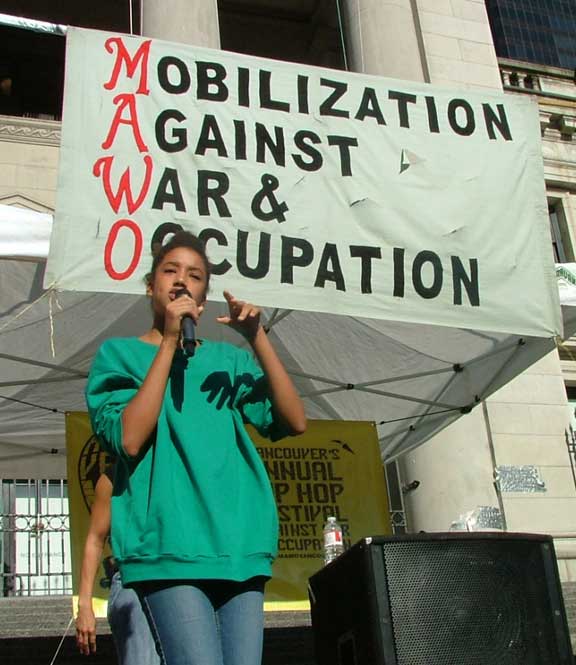 The show gets out of control as the Now or Never breakdancing crew takeover!

Manik 1derful takes the show to a new level! 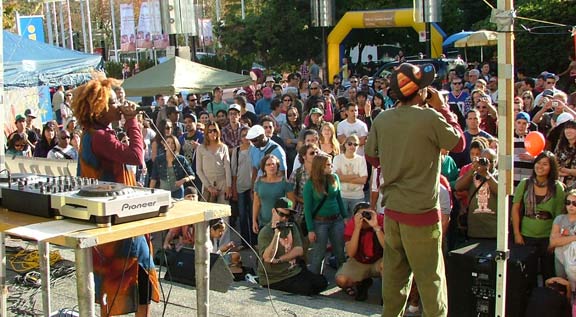 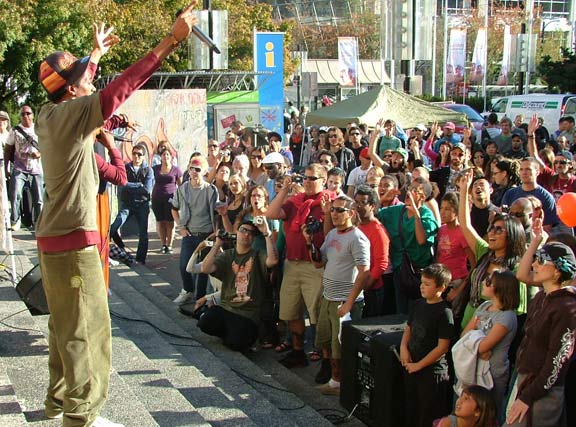 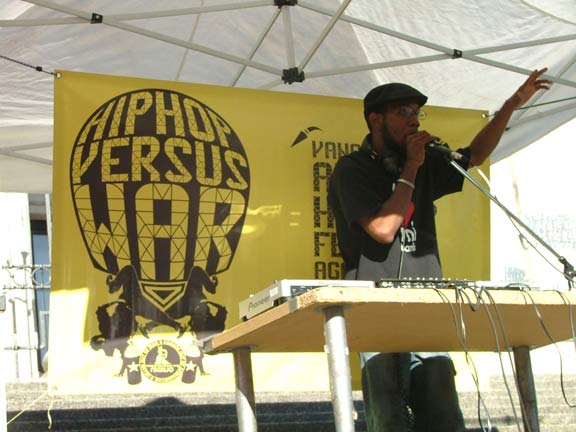 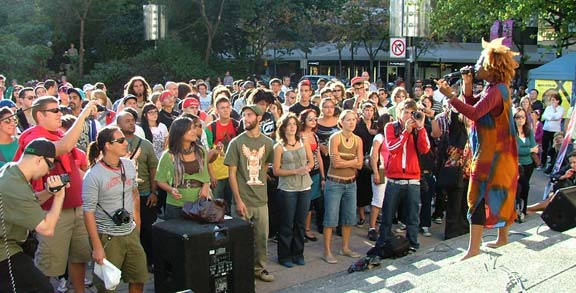 And the crowd is just lovin it! 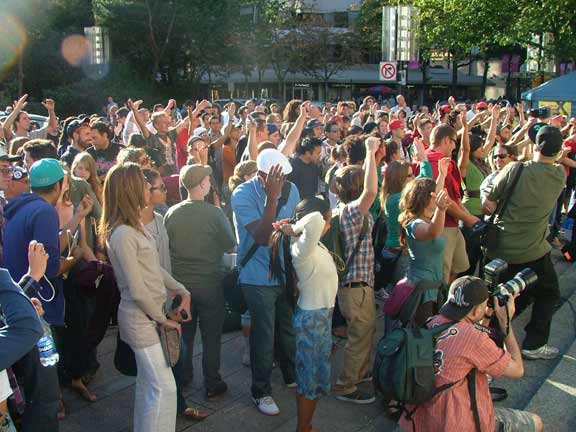 The Groundbreakers takes the stage to wrap up the 5th Annual Hip Hop Festival Against War & Occupation! 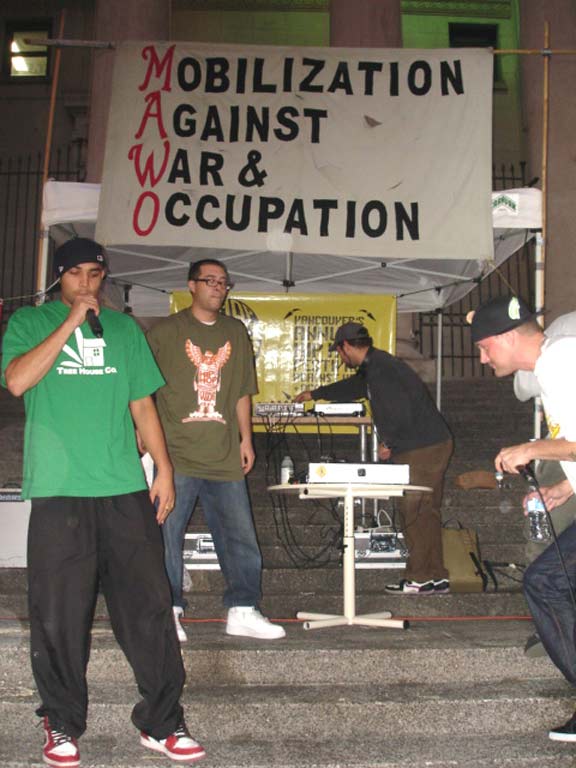 Thanks to all the people who volunteered their time to make this festival a major success! 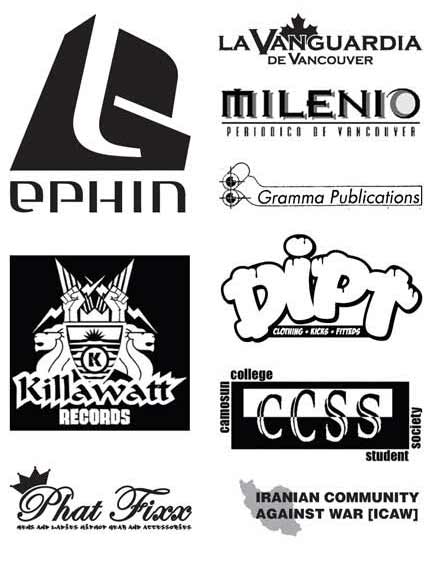